From lake to sea | Arts & Culture
Skip to content

From lake to sea

From lake to sea

ANN ARBOR, Mich. — The University of Michigan Life Sciences Orchestra will take its audience on a musical journey across the waves, with a free concert on Sunday, January 19, 2014.

The performance will begin at 4 p.m. at U-M’s famed Hill Auditorium at 825 N. University Ave. in Ann Arbor. It is open to the public with general admission seating. No tickets are required.

The LSO — made up of doctors, scientists and others — will include three works linked by water: Johannes Brahms’ Symphony No. 2 in D major, Op. 73, Felix Mendelssohn’s Calm Sea and Prosperous Voyage, and Claude Debussy’s La Mer.

Brahms composed the symphony on the shores of an Austrian lake called the Worthersee, and the pastoral mood evokes the peaceful waters and surroundings. The symphony includes the melody now known as “Brahms’ Lullaby”. 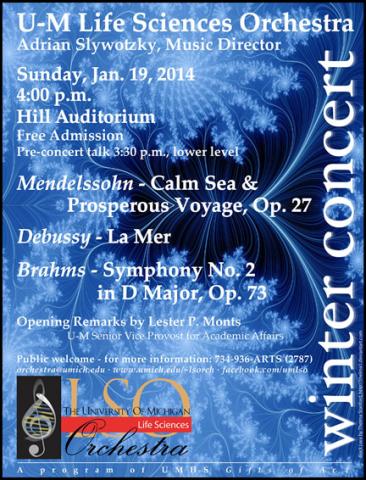 Mendelssohn’s nautical-themed overture was inspired by seafaring poems of Goethe, while Debussy’s collection of three symphonic sketches call on the orchestra to illustrate the leaping waves and swirling winds of the ocean.

The LSO will be led by music director Adrian Slywotzky, a DMA student in the U-M School of Music, Theatre & Dance’s nationally known orchestral conducting program. Slywotzky comes to the LSO from another ensemble made up of medical and science professionals and students: the Yale Medical Symphony Orchestra.

This is the first concert of the LSO’s 14th season; it will be introduced by Lester Monts, Ph.D., U-M Senior Vice Provost for Academic Affairs and Professor of Music.

The next LSO concert will be Sunday, April 27, also at 4 p.m. at Hill Auditorium.

The LSO is made up of medical, health and science faculty, staff, students and alumni from throughout U-M. The orchestra is part of the Gifts of Art program, which brings the world of art and music to the U-M Health System. The LSO gives members an outlet for their musical talents and a chance to interact with one another across academic disciplines and professions. Founded by students and staff from the U-M Health System, the orchestra made its concert debut in January 2001.

For more information on the concert or the LSO, visit www.umich.edu/~lsorch or www.facebook.com/umlso, send e-mail to orchestra@umich.edu, or call (734) 936-ARTS.