Ken Fischer is president emeritus of the University Musical Society. Fischer’s new book, Everybody In, Nobody Out, chronicles his 30-year tenure as UMS president from 1987-2017.

“He is a man whose presence is friendship.” – Wynton Marsalis

There are so many ways to describe Ken Fischer, president emeritus of the University Musical Society at U-M (UMS), that it’s nearly impossible to do him justice. There’s “irrepressible optimist.” Or “generous host.” Definitely “captivating raconteur.”

Leave it to jazz legend Marsalis to hit all the right notes in his loving foreword to Fischer’s book, Everybody In, Nobody Out, with Robin Lea Pyle (University of Michigan Press, 2020). The book chronicles Fischer’s 30-year tenure as UMS president from 1987-2017.

In that time, he presented Marsalis to Ann Arbor audiences 19 times, the most of any artist. As he introduces the book, Marsalis details a typical UMS gig, from the moment Fischer greets him through the receptions with donors and students, the performance in Hill Auditorium, and the after-party. He writes:

“At the end of a long day and night, many times across 30 years, [Ken’s] looking at me trying to see if I want to go, and I’m saying, ‘No man, I’ll talk to everyone,’ and he’s saying, ‘We have to close the hall’ and I’m waving him off, and he’s trying to make sure everything is cool, saying to everyone, ‘It’s been a long day, folks,’ and I’m talking to the last of the students and listening to them play, and it’s now well past the hour he should be home and the hall should be closed … but here we are. Me and him. And it’s past midnight when we get into the car and he says, ‘How are you doing? You want to get something to eat and talk about things?’ And I laugh and look at him and we both start laughing … and I’m saying to myself, ‘Ain’t but one thing makes somebody do all of the things he did night in and night out. Belief.’”

Learning from the best 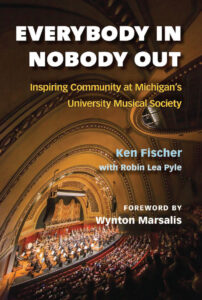 For the next 200 pages, Marsalis’ thesis bears out as Fischer reflects on a career as magnificent and multilayered as any symphony — from falling asleep as a child while his father’s piano trio played chamber music downstairs, to meeting his future wife, Penny, as a 16-year-old French horn player at Interlochen, to accepting the 2014 National Medal of Arts on behalf of UMS from President Barack Obama at the White House. Each page is jammed with leadership lessons and professional wisdom artfully disguised as a backstage tell-all. Mostly it’s a celebration of community.

As Fischer regales the reader with tales of Leonard Bernstein closing the Full Moon Bar at 4:30 a.m. with a roving band of SMTD students in tow, or finding Mikhail Baryshnikov’s ideal golf partner in local restaurateur Dennis Serras, he demonstrates so many of the guiding principles that inform his “lifetime of creative excellence.” More than once he turns crisis to opportunity, whether it’s waiting out a power outage until the lights miraculously come on or phoning every ticket holder to offer a refund when a beloved artist cancels at the last minute.

The book’s title is inspired by his mentor Patrick Hayes, the Washington impresario who was among the cultural leaders to desegregate the theaters of Washington, D.C. Hayes was the first presenter to welcome the African-American contralto Marian Anderson to perform in Constitution Hall after she’d been denied that opportunity in 1939 because she was Black. From Hayes, Fischer embraced the credo “everybody in, nobody out,” the guiding principle that drove UMS programming from 1987-2017.

For three decades, Fischer widened the cultural net cast by his predecessors Charles Sink and his wife, Alva Gordon Sink, and Gail Rector. He boldly went beyond the world of classical music to present jazz, dance, theater, opera, and symphony performances on par with the cultural meccas of the world. He introduced Arab-American artists to Ann Arbor audiences and delivered 10.5 hours of the Royal Shakespeare Company in one day, introducing the actor David Oyelowo as Britain’s first Black king.

Prior to the Berlin Philharmonic’s first visit on Fischer’s watch, he made sure a welcome letter, composed in German, was placed on the pillow of each performer’s hotel room. That considerate gesture helped distinguish Ann Arbor on a tour that included Paris, Bonn, Moscow, and New York, and paid dividends into the cultural future.

As Fischer tells it, the orchestra’s president Peter Riegelbauer told him in 1999, “You’re the smallest town, but you deliver the biggest audiences. You let us play the music we want to play. And when we look out in the audience, we see students everywhere, which we don’t see anywhere else.”

That visit would evolve into a residency at the School of Music, Theatre, and Dance, a move Fischer went on to encourage with countless other organizations he presented for UMS. As a result, SMTD students have engaged with some of the world’s most renowned performing arts organizations. In 2014, Fischer accepted the National Medal of Arts on behalf of UMS from President Barack Obama at the White House.

Perhaps it’s because he is a musician himself that Fischer is so attuned to what artists and audiences need to pull off a successful and uplifting encounter. A French horn player and singer his entire life, Fischer respects and embraces “the artist” writ large. He welcomed performers at the airport himself, using the drive up 94 to form authentic partnerships. Most of those partnerships led far beyond a basic gig, ultimately manifesting in some serendipitous and life-changing moments. Much like an inspired conductor, Fischer makes sure every player, every talent, every contribution he encounters melds in harmony to deliver the glorious symphony he calls life. Everybody in, Nobody Out is available now for preorder from the University of Michigan Press. Before Oct. 1, use the code “UMGLFISCHER” at checkout to receive a 30 percent discount and free shipping. UMS will receive a portion of the proceeds from each book sold.

Since passing the baton to Matthew VanBesien, former president of the New York Philharmonic in 2017, Fischer continues to do what he does best. These days he’s driving around personally delivering copies of Everybody In, Nobody Out to friends and loved ones (many are gifts from UMS to the donors of the Ken Fischer Legacy Endowment Fund; others are courtesy of a donor who encouraged Fischer to write the book). He’s also presenting concerts on his front porch with wife Penny, an accomplished flutist.

“Live music is about creating community,” he says.

On Memorial Day, he and Penny entertained some 90 socially distanced neighbors outdoors. Through yet another connection, Fischer presented Ann Arbor’s Dodworth Saxhorn Band, America’s premier 19th-century brass band, in period costume. It was the last day of Ramadan, and a few days later Fischer received a thank you note from a Muslim neighbor, whom he met the day of the concert. The family had not been able to celebrate at their mosque because of the coronavirus pandemic. The father wrote to Fischer and shared how much it meant to his wife and three kids to be able to make new friends on this sacred holiday.

“That was so touching to me,” Fischer says. “It was so much more than I could have expected.”

Wynton Marsalis could have told him that.

This story was first published in Michigan Today.